Next in our series of features about the people who make rural touring happen, Sarah Cameron, writer and performer of Clod Ensemble’s ‘The Red Chair, tells us her rural touring story:

What’s your involvement in rural touring?

I am a performer and a writer and I am touring a show called The Red Chair with Clod Ensemble.  The Red Chair is a solo show (adapted by the director Suzy Willson and me) and is based on a story I wrote called The Tale of The Man that was So Fat He Growed into The Chair he was sitting Upon. It’s a piece of storytelling, written in a kind of remembered Scots vernacular – part epic poem, part Grimm Tale, part guide on how not to bring up your children. It’s a hoot and a dark one at that….

What got you into rural touring in the first place?

I really wanted to do it. We had an instinct too that the story might demand a non-traditional theatre space – having done it now in traditional theatre spaces, an art gallery and village halls, it would seem the village hall suits the show very well. I’d like to go really rural and do it around a roaring fire in a forest! The show would equally suit the kitchens of a stately home or a derelict industrial building too, for example. The idiosyncratic nature of the story and its telling asks for it to be told in bold, rare, unusual spaces; spaces that support the notion of it being an event, an experience, a happening.

There’s something unique and very special about being invited into a space that belongs to a community. Of course, storytelling began and thrived within small communities, so it makes complete sense to bring The Red Chair into the heart of a community, to share in the intimacy a community group.

What are some of your rural touring highlights?

All Stretton in Shropshire was fantastic – packed to the rafters with a wonderfully warm and open audience. It was our first experience of rural touring and it couldn’t have been better.

In truth, each of them has been brilliant and joyful in their own way. The sense of welcome exuding from both audiences and hosts is very special – rural touring venues really know how to look after their visiting artists and the feedback from audiences feels very real and heartfelt.

What would you say to anyone thinking about getting involved in rural touring?

It’s incredibly enjoyable and hard work. It’s a different kind of responsibility as a performer too. It’s a get in and get out –  a fast turn around and there’s something very appealing in this. 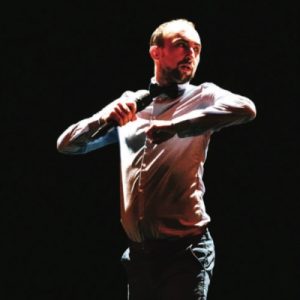