om is a rural touring promoter. He is also Chair of NRTF. His article “What a Performance!” was featured in the Countryman magazine which is available in all good newsagents www.countrymanmagazine.co.uk. Read about Tom’s experiences below…

Sometimes it’s the ticket sales. But more usually it’s the positioning of the lights. Or the whereabouts of the corkscrew(s). Or working out how to squeeze another five seats in for late arrivals. Or juggling the dietary requirements of the actors who I’ve offered to feed before the show. But whatever the worries of being a rural touring promoter, it’s always great fun and immensely satisfying.

I first took an interest in what I learnt was called ‘rural touring’ in 2009. I was working as the news editor at BBC Radio Cumbria. Occasional press releases would come my way, advertising what sounded like high quality, professional performance art — drama, music, comedy, magic, even dance — all taking place in the extensive network of village halls that pepper a rural county like Cumbria.

I was intrigued. How on earth did that happen? How did they get such astonishing calibre of artists? How did this process work?

I dug a little deeper, and before I knew it, I had become what is known in the rural touring world as a ‘promoter’. That is, a volunteer who makes an event happen in their village hall.

There are currently 1,659 of us across rural England, Wales and Scotland. And in 2016 we put on shows to more than 330,000 paying audience members — a whopping twenty-six per cent increase over the last ten years.

My village of Castle Carrock hasabout 270 inhabitants and it’s located ten miles east of Carlisle, on the edge of the North Pennines Area of Outstanding Natural Beauty. We lost our shop a few years ago when the proprietor died and no one stepped in. But we still have a good pub, a thriving school, a church and a village hall, the Watson Institute. And so we have enough amenities to keep some kind of community spirit going — so long as people use them. And hosting rural touring shows has been a crucial mechanism to keep the hall busy and talked about.

The role of being a promoter itself varies enormously. I am the programmer, the theatre director, the marketing department, the box office, the host and the front of house. And often I’m the lighting technician, the sound engineer and the stage manager too. A true modern-day rural impresario.

There are two seasons to the rural touring year where I live in Cumbria: the spring season and the autumn season.

An organisation called Highlights acts as the clearing house for me as I choose which shows to put on. Highlights is a charity, one of twenty-seven such schemes across the UK, and it’s staffed by three professionals who know what performance art will work in a village hall. So, along with about eighty other promoters across rural Cumbria, County Durham and Northumberland, I get to choose twice a year which shows, from the menu of maybe thirty that I’m offered, I want to bring to my hall.

My hall. It’s a very special place and means the world to me. Built in 1897 by the richest family in the village originally as a reading room, it’s now a wonderfully intimate village hall and venue where I can sit sixty-five people at a push, cabaret-style (small tables, candles, subdued lighting), with a small stage that I borrow from the school next door.

I know most of my audience very well. I’ve built up a very loyal following over the eight years that I’ve been promoting. The trick is to always, always maintain high standards and professionalism, and then they will learn to trust your selections, come what may.

About a third come from the village, the rest from further afield. Music always sells better than drama, and probably always will — I suppose it’s more accessible, less of a risk. But in my experience, it’s often the variety of the offer which drives success. Take the last three shows I’ve put on. In May I hosted the Montreal Guitar Trio from Quebec, who stunned everyone with their musicianship. In February it was an evening of poetry and music with Radio 4’s Kate Fox and Union Jill. And in late 2016 it was a play called Launch Party, about young people leaving the countryside.

So the variety is remarkable. And the bit that usually raises un knowing eyebrows is the professionalism.

All of the performers make a living out of this. All of them have done very well to be taken on by the schemes in the first place. But in return, performers have had mini tours created for them, often with the offer of free bed and breakfast thrown in, and the chance to ply their trade in wonderfully intimate venues.

The schemes get some of their money from the Arts Council, some from the box office and some (though less and less) from local authorities. It means that they can help sudsidise more ‘risky’ shows, encouraging more confident promoters to try out shows that might on paper be more difficult to sell. And all the schemes are affiliated to the National Rural Touring Forum, a small organisation with, again, a skeleton staff which advocates for rural touring as well as helping to drive a central strategy. (This summer I was appointed the new Forum chair.)

I love being involved. I love the challenge of choosing a show which I think will work for my audience (my reputation is constantly on the line). I love witnessing people coming together. I love experiencing superb performance art. All on my doorstep.

This article was originally printed in the October 2017 issue of the Countryman magazine which is available in all good newsagents as well as via subscription too www.countrymanmagazine.co.uk 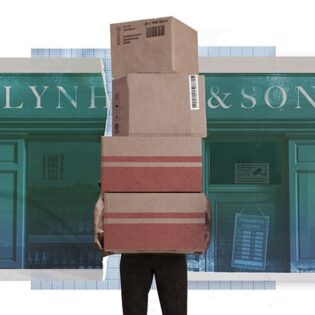