In the second of our ‘Reflections on New Directions’ blog we hear from another of our wonderful social media helpers – Sam. Sam is a theatre maker and recent graduate of Worcester University – our hosts for the conference. Here he talks about how the conference opened his eyes to the opportunities Rural Touring presents to theatre makers.

The National Rural Touring Forum (NRTF) 2018 was a bit of a crash course for me. Despite working in the Arts as a theatre director (Clown Funeral Theatre Company) and Youth Arts worker (C&T Digital Theatre/EMERGE Festival Walsall), I was only faintly familiar with rural touring. The closest I’d had to a rural touring experience was the odd variety night or youth theatre show at the Village Hall in Nuneham Courtenay, a cluster of about 40 houses in the Oxfordshire countryside, and a Robbie Williams tribute act at the Cockadoo, the local Chinese restaurant. To be thrown into a world of music, dance, theatre, poetry and comedy running all over the country was an exciting wake-up call!

This year’s NRTF featured around 30 touring schemes from across the country, representing everywhere from pubs in Cumbria to community centres in the Black Country to village halls in Cornwall. We were treated to live music every evening, no less than 22 showcase performances spanning dance, theatre, poetry and storytelling, as well as meetings, networking opportunities and buffets aplenty. Amongst all this, I was struck by the extraordinary enthusiasm for such a variety of performances amongst delegates at the conference, and it didn’t take long to appreciate the amount of work every scheme and promoter puts into finding acts that they trust. That really is a key word – trust – as many promoters are volunteers, having gained a reputation amongst their community for putting on good acts that people are happy to pay to see.

So how do artists make work for a rural touring context? As a theatre-maker myself, I’m used to making shows that can move from studio to studio, rely on similar lighting rigs, powerful PA system and a black box space. Although these spaces do exist in rural touring schemes, performers are often equally faced with the task of showing their work in a theatre one night, and a library the next. Rather than seeing this as a daunting task, as I might have done before this conference, the attitudes of performers to the rural touring circuit has been exciting to see, with adapting work to new spaces being seen as an opportunity rather than a challenge.

Fiona Coffey described the atmosphere of rural touring performances as having a uniquely ‘live’ atmosphere. When the audience all know each, and come to the same village hall every weekend to catch-up, chat, and celebrate the week, it creates a community energy that performances can build off. Fiona talked about how she actively tried to create an immersive, fun dimension to all her shows, which allows her to take part in the community energy of rural touring. This is a great example of artists building their work to suit a rural touring audience.

Some artists, such as Little Earthquake and Pentabus Theatre, have gone one step further. Little Earthquake described how a number of their previous shows had been created by actively going into community centres in rural areas, and holding workshops and discussions about what communities actually want to see. Their latest show, ‘I Ain’t Afraid of No Ghost’, was a highlight of the showcase for its fantastic humour and intriguing premise (a story about Co-Director Gareth’s relationship with a ghost called Bernie), and their showcase performance made sure to mention that their show featured an interval, greeting with cheers and applause by promoters in the audience. I was unaware of the importance of intervals to venues, but it is absolutely essential in many locations, as interval bar sales are the main source of income during these events. Pentabus, on the other hand, used their showcase to seek out rural collaborators around the coasts of Britain, as they wanted local people to feed into and feature in ‘One Side Lies The Sea’, their latest performance. Not only does this help to create connections amongst rural touring schemes across Britain, but it uses rural touring as a way to help local communities create artistic work.

Building shows for audiences is one way to go, but some promoters and performers were keen to celebrate another method: make work that is good, and adaptable. Music is a wonderful artform for rural touring, because it can generally be done just about anywhere, and a good musician can move around the country, taking the same songs to venue after venue, and receive fantastic responses from audiences who are able to talk, drink, eat and join in with the shows. Musicians don’t necessarily need or make their songs for an audience, or for a particular venue, it just needs to be good. Venues also often find cheap ways of improving their acoustics, such as hanging curtains and putting up soft pinboards, which is much simpler than installing a lighting rig for a specific piece of theatre. But anyone can take this approach, for as long as the work you make is enjoyable and adaptable, it can be suitable for rural touring… and it’s a fantastic opportunity to reach new audiences if you do! Rural audiences aren’t necessarily looking for a particular kind of show, they just want to see something good, and they appreciate variety in their programming.

This has been a wonderful learning experience, and I can’t thank NRTF highly enough for the opportunities I’ve had over the last few days. The next time I make work, I will be considering right from the start how to make it suitable for rural touring, and I encourage every artist I know to think about the potential that it can open up for them. 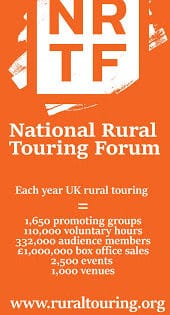 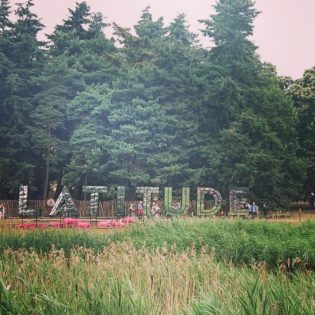