As 2018 finishes as does Barbara Slacks’ time as co-director of the rural touring scheme Highlights when she retires at the end of the month. Barbara has been at the helm of Highlights, and a much treasured rural touring colleague, for over 20 years. Back in summer, we celebrated Barbara and all her wonderful work, with the much deserved, NRTF Special Award. Her colleague, friend and Highlights co-director, Rosie Cross, gave a speech which left many of us with tears in our eyes.

To say thank you once again to Barbara for all the wonderful work she has done for Rural Touring in the UK, we wanted to share Rosie’s speech once more. Don’t worry though, we’re not letting Barbara go that easily – Barbara will continue to host rural touring events as a voluntary promoter in Appleby, Cumbria, for years to come!

21 years ago in 1997, as the arts officer for one of the District Councils in the North Pennines, I interviewed Barbara for the job of Director for the brand new Highlights Rural Touring Scheme. 10 years later in 2007, she interviewed me for the position of Co-Director of Highlights. Since that time, I’ve had the great good fortune to be her job share partner.

Back in 1997, Highlights worked with a handful of venues in the 4 districts which made up the North Pennines. Barbara grew the scheme to what it is today, with nearly 70 venues, covering 3 counties. She secured regular funding from ACE and from the 3 County Councils – as well as numerous project grants over the years. Remember that NRTF also was constituted in 1997. In those early years, Barbara got involved in the small network of Rural Touring Schemes which were starting up around eh country.

And in the year 1999, she hosted one of the earliest NRTF conferences in Appleby in Cumbria. Of course, the NRTF conferences then weren’t quite the large affairs that they are today; but also remember that at that time, there was only Barbara at Highlights and she pretty well put on the conference alone – an enormous feat! And more recently Barbara has joined the NRTF board.

Barbara is held in the highest esteem by all of those who come into contact with her professionally. Scheme managers across the country admire her – especially those in the North, whereas you may know we have a particularly strong network; and that’s due in no small part to Barbara’s efforts over the years. But this appreciation extends also to all of our volunteer promoters, who love her and think the world of her. The same is true of funding partners and of course artists and companies. Just recently I saw an email to Barbara from a company, saying something along the line so simply:- “You’re just so brilliant. Thank you!”

Scheme managers have a lot of tangled tricky stuff to sort out in all sorts of areas. Faced with a problematic, thorny situation, whereas many of us may lose our rag and turn the air blue, Barbara keeps her calm, sorts things out and everyone is left happy and content. She has a wonderful quality of impartiality and compassion and treats absolutely everyone in the same fair way.

I reckon, that in whatever capacity we know Barbara, through our lives in the Rural Touring scene, we are all privileged to be counted AMONGST her loves and passions. I say AMONGST because we must acknowledge and not underestimate the other loves and passions in her life – these being:-

So, ladies and gentlemen, I give you Barbara Slack, THE most deserving recipient of this very special award. 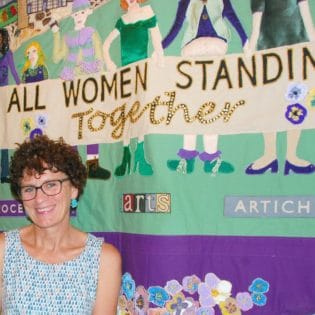