This year’s New Directions Showcase was held at the fabulous Worcester University. As well as providing comfortable digs, two professional (but very warm) theatre studios and catering, they also provided a whole team of incredible students. Without whom the showcase just would not have gone so smoothly. One of those invaluable helpers was Noah, a recent Worcester University graduate, who teamed up with NRTF Stephie to cover the social media for the three days. At the end of the showcase, we asked Noah to pen us some thoughts on his experience and his understanding of Rural Touring… we think you’ll like, and be impressed, by what he has to say…

There’s a saying in life, ‘timing is everything’. My name is Noah Kilworth; within the last month, I have spent my time completing a degree (Drama & Performance – University of Worcester) moving back from Worcester to my hometown of Wolverhampton, marrying my fiancé and, last but not least, searching for employment.

When Dr Jane George (Head of Theatre and Film – University of Worcester) approached me in May 2018, asking ‘are you interested in writing a blog for the National Rural Touring Forum’s showcase?’, the answer was a simple ‘yes’.

My first experience of rural touring theatre came whilst studying on the Touring Theatre Masters course (University of Worcester), a new four-year integrated master’s degree which specifically equips students with hands-on experience of touring theatre and the related skills to be successful in this career.

In winter 2016, my peers and I travelled to Malvern, Stourport and Ludlow to perform in community centres, parish halls and theatre studio spaces. On-route to our first venue, travelling from the confines of the University of Worcester, I remember feeling a ripple of uncertainty. I guess, for me, ‘rural touring theatre’ was totally unfamiliar and a step into the unknown. My trepidation soon changed when I met the managers behind the venues, the promoters who had booked the work and the public who had paid money to be entertained. I soon realised that the rural network has as much dedication, heart and thirst for theatre as any urban setting, if not more. Ultimately, I realised that as long as we performed quality work, everyone will be happy.

Perhaps, what surprised me the most at this year’s showcase, was the vast range of work displayed by the artists and practitioners. From traditional theatre to dance, poetry and storytelling, the three-day showcase truly covered a vast spectrum of theatrical disciplines.

A large number of the shows used autobiographical stories, exploring journeys which they themselves had encountered. The majority of acts, in my opinion, shared logistical similarities and set-ups. Familiarly, I witnessed casts of no more than three (many solo performers) and simple set designs which were easily manageable and manoeuvrable.

As a result, aesthetically speaking much of the performances were comparable in appearance. However, each artist had a unique story to tell. My question to the artists was quite straightforward, ‘Why tour rurally? Specifically, I wanted to know what the term ‘rural theatre’ meant to the performers. The very people who pitched their ideas hoping to be selected. The responses were vastly varied, from this I understood the different approaches used by the companies to create their piece are often unique and individual.

For some, such as Pentabus (National’s Rural Theatre Company), the question is a no-brainer; as Sophie Motely (Artistic Director) stated: “this is what we do – telling stories with local relevance making a national impact”. Still in its early development, Pentabus’s ‘One Side Lies The Sea’ explores maritime heritage of rural coastal Britain. They use verbatim theatre to great effect, the piece also uses digital media throughout.

The Smog, a new theatre company established in 2016 want to push absurd theatre for audiences looking for an alternative. For London based artists Nick Cassenbaum, writer and performer of ‘Bubble Schmeisis’, and Shane Shambhu, with his piece ‘Confessions of a Cockney Temple Dancer’, the question ‘Why tour rurally?’ evoked different standpoints. For example, East London’s Nick Cassenbaum stated: “its great touring to rural communities because you meet different types of audiences – the simple fact that you’re not in your hometown changes everything”. For Shane Shambhu, by touring his work rurally he not only bridges the gap between different cultures but also uses the opportunity to collaborate with artist across the country.

Elephant and Castle, by Tom Adams and Lillian Henley, use music and acting to deliver a thought-provoking piece on sleep disorders.
Hannah Prior, creative director and theatre-maker at Ignition spoke about the usefulness of the NRTF showcase for networking, “It’s great to take time to be able to meet all the other schemes and see the array of work that is available to rural communities.” Hannah has worked extensively with Looked After Children, educated in pupil referral units in the London area.

Flipping the coin, I asked the promoters and venue managers the similar question, “What do you want to see toured rurally?”. Those who are connected with schemes that support and encourage new work across the UK are quite simply committed to bringing diverse quality pieces of work to rural communities.

Paul Graham, chair at arts alive informed me “bringing acts to a venue is risky – if it doesn’t work people in the community will remember”, continuing “if you give people a night they remember – for the right reasons then there’s no better feeling.”

Due to the practicalities, many artists would tell me that one-person shows work better and a minimal set is a bonus. On a whole, promoters felt that selling a show with a bigger cast may be more lucrative but not always.

Singalongs or, theatre with musical soundscapes are often a winner, especially if the piece of work attracts multiple age ranges. However, the final say always returns to the word ‘quality’.

I intend to create a pitch specifically aimed at the rural touring community. I’ll also be spreading the word to fellow theatre-makers, ‘if you’re not tapping into the rural touring theatre world, you’re missing a trick.

Thanks for reading, take care!

We are very much looking forward to New Directions 2018 in Worcester.

So far we have nearly 200 people coming over the 3 days including Artists, Scheme Management, Promoters, Award Nominees and staff.

Opening up a New Direction for Theatre Maker Noah: Reflections on This Years Showcase 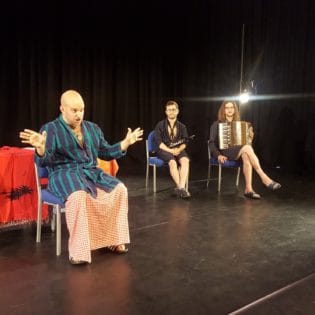