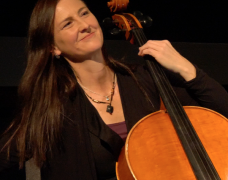 This is the cello as you’ve never heard it before. Ilse de Ziah takes traditional Irish melodies and gives them a deep and fabulous transformation. Sometimes rock ballad, sometimes irresistibly foot stomping, Ilse’s solo show is utterly captivating and moreish. Best of all are her own arrangements of the slow Irish airs - love songs and laments - sonorous and aching on her mellow instrument. The cello produces melody and harmony so that sometimes you think you’re listening to a whole band. At other times a single haunting line says all that music can ever say. Through it all Ilse’s vibrant personality carries you along and transports you to a magically emerald musical landscape. Ireland-based cellist and composer Ilse de Ziah has a passion for composing and arranging music for the cello. Using traditional Irish melodies as source material, she creates contemporary arrangements perfectly suited for the cello. With the marriage of classical detail and folkloric tradition, this makes for a transcendent musical experience. Ilse is well respected for her interpretation of slow Irish Airs, with a CD and published book Irish Airs for Solo Cello. Her award winning film Living the Tradition, An Enchanting Journey Into Old Irish Airs, reflects the passion she has for the airs and it won best documentary in the Eirie International Film Festival. She regularly tours her solo cello performance around Europe and has a large following on her solo cello YouTube channel. In Summer 2018 Ilse featured as soloist in the largest Gamelan Festival in the world, in Java with the Irish Gamelan Orchestra. She is principal cellist of the Cork Opera House Concert Orchestra, a member of the Quiet Music Ensemble, conducts the Cork Light Orchestra, lecturer at University County Cork, and performs and records with many rock, pop, jazz and world musicians. Ilse’s second album of Irish music and solo cello compositions will be released in April 2019, her next music documentary is in pre-production, and she preparing to publish her fourth book of solo cello music. You can expect to enjoy a concert of Irish, Australian, and Celtic influenced music played by an accomplished cellist with inspiring depth and vivacity. Audiences who have a connection with Ireland, Irish music audiences, classical audiences, cello lovers, and folk music audiences love the show. “a gem glistening with grace and sparkle” Munster Express

@bernardlyricfm  thanks for playing Transcendence! Loved your kind words 🙂 It's live just now at Bandcamp before re… https://t.co/tkssIvPrbJ

I play this on track 3 from my upcoming album "Transcendence". Released on Friday 18th “Caoine for a Dead Child (Ca… https://t.co/xRUUVPK2IU