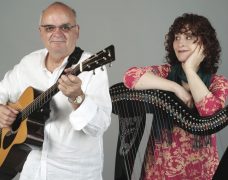 The award-winning virtuoso partnership of “one of the UK’s greatest guitarists” (BBC RADIO 2) with “the doyenne of Irish harpers” (SCOTLAND ON SUNDAY) has toured in twenty-three countries to venues ranging from the tiniest of village halls and historic European churches to palaces in Kyoto and Istanbul, London’s Barbican, Sydney Town Hall and Cologne's Philharmonie; recorded nine CDs; and given TV and radio performances on five continents. Expect a breathtaking blend of traditional Irish music, hot jazz, bluegrass and baroque, spiced with striking new compositions and Chris’s “delightfully subversive wit”!

Máire Ní Chathasaigh is “the great innovator of modern Irish harping, a player of outstanding technique and imagination” (The Rough Guide to Irish Music) and one of Ireland’s most important and influential traditional musicians. As a teenager in the 1970s she invented a whole new “traditional Irish” style of harping that quickly became the norm amongst both her contemporaries and the younger generation of Irish players, thereby spearheading the re-introduction of the harp into the mainstream of the living tradition. She was described by the late Derek Bell as “the most interesting and original player of the Irish harp today”. She is the sole harper recipient to date of Irish music's most prestigious award, Gradam Ceoil TG4 – a national recognition of her pioneering work. "Her work restores the harp to its true voice." THE IRISH TIMES

Chris is “one of the UK’s greatest musicians” (BBC Radio 2) and“one of the top guitarists of his ilk in the world” THE LIVING TRADITION. He has toured and recorded with many luminaries of the folk and jazz worlds, among them Boys of the Lough, Aly Bain and Stéphane Grappelli. “Dazzling” ACOUSTIC GUITAR (USA) “His playing boggles my mind” Flatpicking Guitar Magazine (USA)

“Dazzling virtuosity” THE DAILY TELEGRAPH “Music of fire and brilliance from the high-wire act in traditional music” THE IRISH TIMES “Their blinding technique, sizzling Irish reels and hot jazz improvisation brought an extended standing ovation… Newman has the great gift of being informative and hilarious simultaneously” THE WEST AUSTRALIAN “An eclecticism and spirit of adventure that is quite thrilling" THE TIMES “Blazing guitar and dancing harp” DIRTY LINEN (USA) ”Brilliant, innovative harping and guitar-playing of astonishing virtuosity and versatility” * * * * SONGLINES

About their Christmas show, "Celtic Christmas Strings:
There’s something magical about harps, and particularly at Christmas, though Máire and Chris’s alchemy on harp and guitar creates a very special magic at all times. Individually famed for originality, innovation and virtuosity on their respective instruments, together they have created one of the most distinctive voices in modern acoustic music. Their many recordings express both the depth of their commitment to tradition and an eternally playful, curious and adventurous spirit. Their new Christmas show features a breathtaking blend of traditional Irish music, swing jazz and bluegrass, plus festive favourites given a fresh voice with arrangements that are intricate, inventive, moving and beautiful, and performed in their characteristically heart-warming style – a spellbinding treat for mid-winter.
“A delightful... satisfyingly original, often refreshingly unpredictable take on festive favourites... Joyful, gorgeous and uplifting” THE LIVING TRADITION “Both are in the virtuoso class” THE GUARDIAN “Masterful playing... (ranging from) the entrancing and delicate to the wildly celebratory...” **** FOLK WALES “(Their) mastery and magic... produced a rapt response” THE GUARDIAN.

Just renewed my Irish passport online: it was processed in 48 hours and arrived on my mat in Yorkshire 6 days after… https://t.co/ob2Nfgxluv