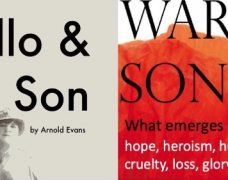 Ros trained at the Guildhall School of Music and Drama. She made her West End debut as Maria in West Side Story and subsequently played Laurie in Oklahoma for a year with the Palace Theatre, London. She has toured nationally and internationally, and worked with, among others, the RSC, Bristol Old Vic, Music Theatre London, Theatre Wales, Made in Wales, the WNO and the Sherman Theatre Company. Most recently on TV, she played Cynthia in Nice Day for a Welsh Wedding and Krone in Young Dracula. Ros is a founder member of theatr peña and played Bernarda in “The House Of Bernarda Alba”. Ros is currently touring with Gavin Roberts (piano) with two new shows: Novello and Son and War Songs. Novello & Son is a two-person show about Clara Novello, Ivor Novello’s mother, who was famous in her own right. Novello &Son has had several successful performances in London (The Jermyn Street Theatre), Cardiff (the Wales Millennium Centre) and at music festivals. Tour dates in 2020 include Wales in London Week, Monmouth, Treorchy, Milford Haven, St Marylebone Festival (London) and Tenby. Entirely different in content, is another show War Songs - with songs and words about war and in particular the World Wars of the 20th century. War Songs has also been similarly successful in Monmouth - Savoy Theatre, Newport - Riverfront Studio, Cardiff - The Gate, London - Hinde Street Methodist Church, St James’s Studio Theatre, The Actors’ Centre, The Women and War Festival in the city (11 performances), Barn Arts War Weekend, Norfolk and at the AGM of the Association of English Singers and Speakers in London in April in 2019.

Listen to Jo Good talking to Ros Shelley on BBC Radio London about the re-opening of theatres post COVID-19 and abo… https://t.co/omHarzsNLk

Novello & Son ✨One Night Only✨ *Live* at The Crazy Coqs on Sunday 20 September at 7pm Just a few tickets left! ⁣… https://t.co/0wPt2zmbrw

If you've never been to @CrazyCoqs  you really are missing out! Madame Clara Novello Davies would have been in her e… https://t.co/KhwdA2teA1