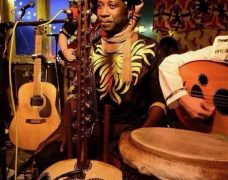 Amadou Diagne is a musician who has the traditions of West Africa at his fingertips. Singer, songwriter, percussionist, Kora and guitar player, Amadou is a multi instrumentalist who comes from a long family line of traditional Griot Musicians and praise singers from the area around Dakar, Senegal. Amadou is a former member of L'Orchestra National du Senegal with whom he regularly performed as a percussionist in concert and on television for some of the top west African music stars. Since Moving to the UK Amadou has been writing and performing his own material developing a unique style that draws heavily on his West African heritage and skills as a percussionist whilst being inspired by his encounters with music and performers from a wide variety of backgrounds. African blues guitar, dynamic world class percussion, to gentle lilting Kora, Amadou makes music that takes you on an exciting journey from the UK across the sahara to Senegal, forging a growing reputation as an exciting live artist, both solo and with his band Group Yakar. Senegalese multi instrumentalist, singer and songwriter Amadou Diagne and his band Group Yakar have over time been developing a style that is uniquely their own. Amadou and his band create music that is truly hard to pin down and categorise, from afro beat to African soul, blues, jazz funk to Senegalese mbalax, West African Griot praise singing to Rock, always more than the sum of its parts. Amadou and his band delight in dynamic performances that get audiences dancing! “Honey-smoked vocals ...Plaintive, acoustic and brimming with an unhurried assurance.” Jamie Renton, fROOTS Magazine no.361, July 2013 www.amadoudiagne.com In 2012 he was signed by World Music Network, and his debut solo album Introducing Amadou Diagne was released in february 2012, it went straight to no. 16 in the European World Music charts. His follow up Yakar was released on the Waulk Records label in May 2013. The album Yakar received a Four star review in Songlines magazine, and top pick playlist review in fRoots. A track from the album was included on fRoots CD download as well as being included in their top 50 album list for 2013. Amadou Diagne’s third album Ligee was released in 2015 on LongTale Records to great reviews. Amadou’s music has been gaining global airplay on radio stations from Australia to Israel, Denmark and the USA as well as on BBC Radio 3 Late Junction.

RT @MusicXango : "...two craftsmen with a passion for their music, and then the result can only be top notch!" says Tim Ianna in https://t.c …