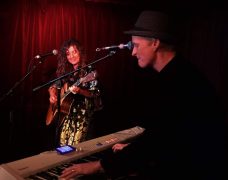 We are Acoustic duo The Portraits. Ours are storytelling songs that engage audiences, and we're pleased to say, seem to move them considerably. But we also have an upbeat side too - some great singalongs and laughs, if the crowd are up for it. Following Clare Balding’s description of The Portraits as “Absolutely Beautiful” during our live session on her BBC Radio 2 show in 2017, in 2019, singer songwriter and BBC DJ Tom Robinson referred to us as “Irresistible and Irrepressible” and 1994 Eurovision winner Charlie McGettigan said “Really lovely...when they play live, they sound like a studio recording made in Abbey Road”. In 2016, our tribute song to Jo Cox MP, ‘Nobody Can Ever Murder Love’ was championed on BBC Radio 2’s Good Morning Sunday show, and our big singalong 2019 single ‘Harmonise’ - which was designed as a follow up along the lines of Jo’s “We have more in common than that which divides us” mantra - featured the video selfies of dozens of supporters and friends of the group singing the title of the song into their phones. This, along with the heartbreaking ‘Except For Me’, our most recent single which tells the story of a young woman sent to one of Ireland’s Mother And Baby homes for unmarried mothers of yesteryear and which has been streamed thousands of times on Spotify, feature on our well-received new album ‘For Our Times’, about which respected music magazine Fatea said "Two beautiful people exuding warmth and kindness, while presenting us with a masterpiece. We all need more of this."

@MindCharity  Thanks so much Steph. We’re feeling really excited about this song and delighted to support your incredible work ❤️

@MattBarkerRadio  huge thanks for your retweet ❤️

AN URGENT APPEAL The#ShineALighttoFightCoronavirus  💜 group have teamed up with THE PORTRAITS for the release of a… https://t.co/Riqpi8dVDz