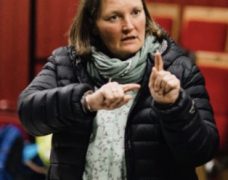 Nicky works as a freelance director and most recently created Titania’s Dream, an outdoor performance for Compton Verney to test the possibilities for performance during as we come out of lockdown, and Hidden Histories of New Place for the Shakespeare Birthplace Trust, exploring the more unusual stories of the venue. She has worked as an Assistant Director at the Royal Shakespeare Company on Tartuffe, Three Letters, Kingdom Come and A Midsummer Night’s Dream - A Play for the Nation, where she directed the Mechanical scenes, including the role of Bottom, which were played by amateur actors from The Bear Pit, a company Nicky continues to work with. Recent productions for The Bear Pit include The Norman Conquests Trilogy, The 39 Steps, One Man, Two Guv’nors, Toad of Toad Hall, Brief Encounter, The Hound of the Baskervilles. She has also directed Signifying Nothing (Shakespeare Stripped) Macbeth, Twelfth Night, Love Bites (Westcountry Theatre Company) A Winter’s Tale, The Crucible, Mother Courage, A Christmas Carol, Henry V (Stage One Youth Theatre) Man to Man (Wooden Fish Theatre Co, Cork) and assisted on Much Ado About Nothing (Westcountry Theatre Company) performed at the Minack Theatre, Cornwall.
Nicky is currently an Education Associate Practitioner for the Royal Shakespeare Company as well as working as a Freelance Events Host with clients including Historic Royal Palaces, Stratford Literary Festival, Emma Bridgewater’s Festival in a Factoryand the RSC. She has also worked as an actress, touring schools and and open air venues across the South West.