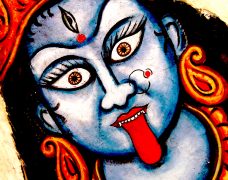 Emily and Sheema have been fusing live storytelling and music for 5 years, specialising in Indian mythology with music that draws on both Indian classical and contemporary traditions. With a style that is both highly accessible and deeply engaging, they have toured a wide range of venues with their two performances (‘Kali & The Ramayana) including British Museum, Soho Theatre, York Theatre Royal, The Story Museum, Rich Mix, Northern Stage, Ancient Technology Centre, festivals such as Beyond the Border and storytelling clubs across the country.

‘100% of the audience rated the show as excellent ( that’s our highest category)’ (Programmer - CRTA)
‘We thoroughly enjoyed hosting Kali. Both the story and the performance were fantastic and from reading the feedback forms the audience were in agreement. The company were great to deal with, efficient setting up and packing down. A pleasure to work with.’ (Promoter - Spot On)
‘Probably the best Rural Touring show I’ve ever seen’ (Promoter - Highlights)
‘Two fantastic nights of storytelling and music which were thoroughly enjoyed by all of our audience and board members’ (Programmer - Artsreach)
‘The insight into Hindu philosophy was amazing’ (Promoter - CRTA)
‘Emily’s storytelling is hypnotic with a wonderful ability to hold audience attention whilst the musical element was incredibly atmospheric and really added to the intensity of the spoken word. What a lovely way to end the show with an offering for the audience to participate within.’ (Programmer - Spot On)