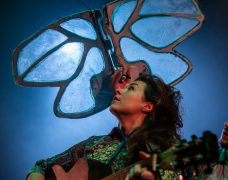 We create visually stunning unique work, with atmospheric live music. Powerful stories are woven to resonate in the hearts and minds of audiences. We first and foremost use objects to tell these original stories through transforming sets and intricate puppetry, these elements defy expectation and surprise by taking on a life of their own. Live music also plays a key role in what we do bringing the heartfelt images to life. We strive to make memorable experiences that cross generations and can be shared in and enjoyed together.

Our first production A Heart at Sea was launched in April 2016 in a secret garden, in the pilgrim’s city of Canterbury. This is collaboration between Half a String’s Artistic Director Peter Morton and associate artist Avi Simmons, and since then it has grown into a performance that is toured nationally 2017-2019. A Heart at Sea was hugely well received at the Edinburgh Fringe Festival playing to sold out audiences, had multiple 5 star reviews and won the Drayton Arms Eddies Award. Boulder was their next major production, philosophical epic folk puppetry that and received critical acclaim in 2019. We also launched Under the Frozen Moon in 2019, a stunning winter show about a girl adventuring to give a dragon a hug, alongside this we published a fully illustrated storybook.

Half a String works regularly around the south east with venues to deliver workshops and have forged a reputation for intricate puppetry and complex set design through numerous commissions for other companies across the UK.

Half a String @HalfaString
1w

We are really excited to be sharing a new project we are doing this year! Sneaky peak...details soon!#puppetry … https://t.co/2ZHUf1A49k

Half a String @HalfaString
2w

WE ARE IN A REHEARSAL ROOM AGAIN!! 😃😃🤯...and we don't mean a zoom room. Massive thank you to @TheGulbenkian  for the… https://t.co/JNcCn2hcgZ

Half a String @HalfaString
3w

RT @LaineyHartley : Just amazing to have been able to perform live theatre this weekend with @HalfaString , and to bee part of @marlowetheatr …