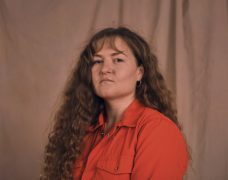 IORA is an Electronica Pop/folk Artist based in Manchester and has been named as a resident artist at the Roundhouse in London. IORA's EP 'eYes Of a bEAst' came out in February 2020. IORA has been supported by PRS emerging artist Fund and Women Make Music Fund, as one of Manchester International festival (MIF) Creative 20, selected by Sigrid (on BBC sounds of winner 2018) for a personal Radar playlist, BBC Radio 2's ‘One to watch’. Other residencies have included working with Beth Orton and Brighter Sound, 'Soundcamp' working with Jenna G, Thirty Pound Gentlemen, Werkha and Reform Radio.

IORA has had notable performances playing sold out shows most recently supporting Badly Drawn Boy at the Roundhouse. Other supports include Stealing Sheep as a part of the 'Rising festival' at the Roundhouse and then in Liverpool on the final night of their tour. Past performances include Southbank Centre, Festival Square (MIF), Geffrye Museum, Bridgewater Hall, Royal Albert Hall. Festivals include Dot-to-dot, 2000 Trees, ArcTanGent. Radio support has been from BBC Introducing Manchester, BBC Manchester, BBC 6 music, BBC Radio 2, Amazing Radio and Unity Radio.

RT @BrighterSound : You can catch these phenomenal four tonight on Guest House Join us at 7pm to catch @LayFullStop , @marthahillmusic ,  @IO …