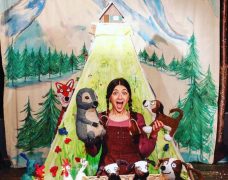 I am an artist and director for two different companies Theatre Fideri Fidera and Swipe Right Theatre.

Theatre Fideri Fidera is a Brighton-based, Anglo-Swiss touring company dedicated to creating original new work for children and their families. Our first two plays Pitschi, the Kitten with Dreams (2016) and Oskar’s Amazing Adventure (2017) have had over 250 performances in the UK and Ireland in the past three years including venues such as The Lowry, Curve, MAC, ARC, the Lyric Hammersmith and many rural touring schemes. Our latest play 'Ugg ’n’ Ogg and the World’s First Dogg' premiered in Edinburgh in 2019 and is now on its first national tour.

Swipe Right Theatre is a female led theatre creating original, cutting edge musical comedy. Their first show '2 Become 1' was a sell-out at the Edinburgh Fringe for three consecutive years, winning the Derek award for best Comedy in 2015, it went on to do two hugely successful runs at the Kings Head Theatre, London. Their latest show 'Scream Phone' had a hugely successful premiere at VAULT festival and the Edinburgh Fringe in 2019 and is getting ready for an ACE funded national tour in Spring 2021.

RT @scenesaver : The Scenesaver Birthday Honour Awards: who will you nominate in the "Best Children's Production" category? https://t.co/tCj …

We’re looking for an experienced costume designer, ideally Brighton/ South East based, to make the costumes for our… https://t.co/Pv2hG8BcbY