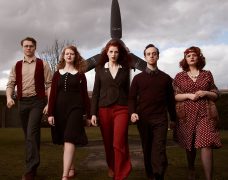 Time & Again Theatre Company are based in Manchester and formed in the summer of 2017 as a new young theatre company wishing to explore all things historical in ways that are fresh and relevant for today. They're particularly interested in exploring the lives of women who pushed boundaries: those who worked in typically male-dominated industries, engaged in political or revolutionary ideas, or behaved in a way that wasn’t deemed acceptable by society at the time.

For the past two years they have been rural touring their shows GREYHOUNDS and CLOUDS, as well as using them to bring history alive at museums and heritage sites such as RAF Cosford, the Severn Valley Steam Railway, and the Pankhurst Centre.

GREYHOUNDS is set during WW2 and follows the residents of a small rural community as they try to stage a production of Henry V in their village hall to raise money for the local spitfire fund. CLOUDS tells the story of a budding aviatrix in 1913 who is determined to become the first Englishwoman to enter and air race, set against a backdrop of the suffragette movement.

Before lockdown began they were working on two brand new shows: EARWIG, following the life of Marigold Webb, a deaf insect collector living in 1927 mixing illustrated projection, BSL, and spoken word, and PAGETURNERS, a comedic adaptation of Pride & Prejudice inspired by the golden age of radio drama. Work will resume on both productions as soon as we can safely return to rehearsals!

Last night we had our first read through and today our banners are going up around Wilmslow! Theatre is making a co… https://t.co/BOhsnXhW03

Thank you so much to everyone that came out and auditioned for A Midsummer Night's Dream today! We had a wonderful… https://t.co/zw2PBQz1RR