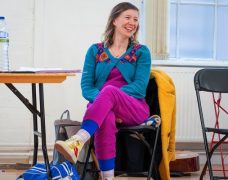 Hannah has produced for her company The Gramophones for 8 years including the creation of 7 shows & 11 tours & has managed large budgets, companies on tour, always making sure the budgets balance, the work delivered is of the highest quality while creating excellent relationships with venues. Outside of The Gramophones she coproduced 'I Dare You' with Tilly Branson & Ria Ashcroft directed by Beth Shouler. She is part of the producing team for The Party Somewhere Else who put on theatre events including 2 week-long festivals at Nottingham Playhouse. Hannah is currently tour booking for NotNow Collectives beautiful show Pepper and Honey.

Hannah has a wealth of experience working in theatre, she has a BA(Hons) in Acting from Leeds University, & has performed & devised with many theatre companies such as Arletty Theatre, Winter Walker & Excavate. She was Artistic Director of The Gramophones for nine years and this year became Co-artistic director alongside Ria Ashcroft. She directed the first phase of 'Tarzanna' & co-directed the second & has directed numerous youth theatre shows. She is about to direct Pinocchio at Nottingham Playhouse in the Neville Studio.

RT @braycrowell : Today my middle school kids read Eve L. Ewing’s “I saw Emmett Till this week at the grocery store” as a model text. Afte…