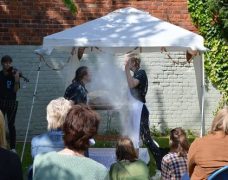 Bellow Theatre are a Hull-based new-writing company rooted in brave and stirring stories Our work is intimate, moving and celebrates DIY aesthetics, usually with a nod towards open landscapes and the smell of cut grass. Bellow always try to champion the downtrodden, forgotten, excluded or silenced; we usually look at fairy tales or folk stories with a modern take on female characters, sometimes bringing live music into the mix. We often present work in unusual spaces, so far including a pop-up restaurant, under an oak tree, in a club, and a carpark, and are equally at home in a shiny studio theatre. Led by Maureen Lennon and Tabitha Mortiboy, Bellow are Supported Artists of Hull Truck Theatre and an Emerging Company of New Diorama Theatre 2017/18; in 2015 our show Billy Through the Window was nominated for the Brighton Fringe Award for Excellence. We have be commissioned to make work for Assemble Fest (The Cautionary Tale of Horrid Ham Carver 2015, The Washerwomen's Warning 2016, Gobble 2017), The Amy Johnson Festival, Heads Up Festival and York Theatre Royal’s On Our Turf initiative. Our last show, Bare Skin On Briny Waters, was part of the Hull TakeOver at Edinburgh Fringe, where it recieved two award commendations from NSDF. It is TOURING again in Spring 2018, you've several chances to see it find out HERE. Gobble, our 2017 Assemble Fest commission is also on TOUR this summer as part of Applause's scheme THE INN CROWD. Find out more HERE.

Jump on this opportunity if only to hang out with these dreamboats. Plus you'll get to bask in all their glory bcos… https://t.co/iEizCepe9q

GOOD LUCK to @BrickByBrickHul  who open their show#OmniScience  today! We can't wait to catch it. https://t.co/XBvQNMRt67