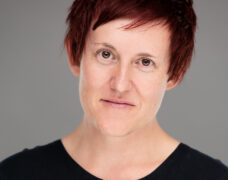 Lorna has been acting and performing her own poetry for over fifteen years. She is Co-creative Director of RoguePlay, (Birmingham's highly physical circus theatre company) writing, directing and performing in original cross-genre theatre. Most recently, RoguePlay adapted her narrative poem '3am Waitress' into a dance theatre show which received a 5 star review at Edinburgh Fringe.
Lorna started out on the performance poetry circuit with The New October Poets and went on to perform at Glastonbury, Ledbury and Shambala Festivals. She has headlined various national poetry nights and has toured with Apples and Snakes as part of Public Address 2. In 2015 she directed, co-produced and performed in 'Ten Letters', an intergenerational poetry show celebrating Birmingham which previewed at Midlands Arts Centre.
Now developing her career as a solo theatre maker, her first show Brazen, which previewed at Birmingham Theatre Festival in 2019, is an autobiographical spoken word show about coming of age, the nature of teenager obsession and the transformative power of music, inspired by her deep connection to Jim Morrison and The Doors and incorporating physical theatre and audience participation.
Lorna's work is unashamedly candid, sometimes heart wrenching, sometimes hilarious She is passionate about using theatre to encourage solidarity, provoke debate, question our social conditioning and ultimately to find joyful connection.