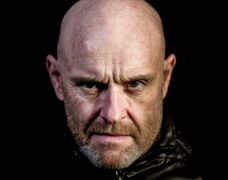 I am an actor, author, stand-up comedian and film maker.

As an actor I wrote and performed the one man play NAUGHTY BOY at the 2019 Edinburgh Festival to critical acclaim. I also have numerous TV, film and stage credits to my name..

As an author I have written 6 best selling sports books and two novels, with worldwide sales of over 700,000 copies. In March 2021 I released the novella of NAUGHTY BOY, my first book for 20 years. The book is receiving rave reviews on Amazon.

In 2000, I set out on a career as a stand-up comedian, and have since positioned myself as one of the most sought after headline acts bot in the UK and internationally. I have also performed at festivals all over the world, from the Alps to Auckland, Australia to Edinburgh.

I have also written and presented two full length documentaries following the fans of the England international football team overseas.

@OspreyRef  Nice one, I'll look forward to catching up 👍🏼