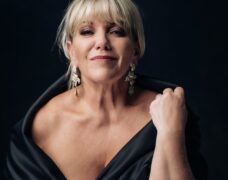 Olivier Award nominated Actress Alison Jiear has different styles of one woman shows that she produces in venues all over the world, from Sydney to New York, Ronnie Scott's Jazz Club and Crazy Cons in London, and throughout the UK.
Reaching an audience of millions on Britain's Got Talent in 2015, Alison brought the judges and the audience to their feet as she performed a rousing rendition of You'll Never Walk Alone. David Walliams hailed "A Star is Born." and Simon Cowell declared she gave “one of the best vocals we’ve ever had on the show”.
Alison has had a 36 year career in the entertainment industry with numerous West End credits, performed on countless film soundtracks such as Shrek II, Lion King 3, Mamma Mia II, provided backing vocals for artists such as Robbie Williams, Kylie Minogue and supported Tom Jones and Shirley Bassey as part of the 3 girl group The Fabulous Singlettes.

An award winning cabaret performer, Alison "crawls into the listener's heart and touches it from deep inside". CABARET SCENES
"To experience her live is to be hit by a gale force of personality and voice." THE STAGE
"A big bring-down-the-house pop voice." NEW YORK TIMES
"The voice of Barbra Streisand and the acting talents of a slimline Dawn French." THE EVENING STANDARD
"A voice clear as a bell" THE TIMES
"A one woman wall of sound" THE EVENING STANDARD