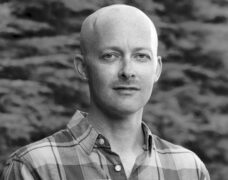 I'm a published writer of fiction/poetry, a performance poet, and an environmental activist. I also run writing workshops and produce arts events.

I'm a founding member of Poets for the Planet, a member of Stop Climate Chaos Scotland’s COP26 culture working group, and a member of the Brent 2020-funded Willesden Junction Poets in Residence.

My writing has been published in more than fifty magazines and journals including Aesthetica, BFS Horizons, Catweazle Magazine, Envoi, Magma, New Welsh Reader, Orbis, Poetry Salzburg Review, South Bank Poetry, The Big Issue, The Interpreter's House, The London Reader, The Rialto, The Wolf, Under the Radar, and Zoomorphic.

My pamphlet Confronting the Danger of Art (Sidekick Books) was displayed in the Treasures Gallery at The British Library as part of an exhibition celebrating a decade of the Michael Marks Poetry Pamphlet Awards. My poem 'How do I convert to pdf?' was placed third in the Brian Dempsey Memorial Poetry Prize. My film noir version of Catullus’ poem 51 was displayed at Covent Garden’s Poetry Café and published in Bad Kid Catullus (Sidekick Books), which The Guardian listed as one of the top ten poetry anthologies of 2018.

In 2020 I co-organised and ran the publicity campaign for an all-day Poets for the Planet event headlined by Imtiaz Dharker, winner of the Queen's Gold Medal for Poetry, which took place at The Society of Authors and included a Poem-a-Thon featuring 40+ poets and 14 eco-themed poetry workshops. This event raised nearly £8,000 for the environmental charities Bees for Development and Earthwatch.

In addition, I developed and managed #BeginAfresh, an ecopoetry Twitter campaign which included filmed contributions from poet laureate Simon Armitage and Ian McMillan, and which achieved 84.9K impressions in its first month.

In 2019 I designed, marketed and delivered two seasons of poetry workshops for Wembley Park Ltd. I also co-produced and performed a version of the Brothers Grimms' Bremen Town Musicians for Open City’s Open House Families event at Wembley Park.

If you need creative content or help with an arts event please feel free to connect with me. I'm particularly keen to work on environmental and climate change-related projects.