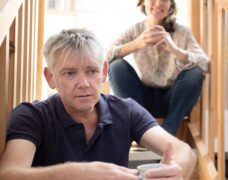 ...not so far from the restrained mode of John Surman’s recent ECM solos
The Wire

We are two musicians who live in the national park of Dartmoor, in the South-West of England. We have been creating landscape and nature inspired music since 2005.

In March 2021, we released the EP, Hemispheres. We collaborated with musicians from Australia to create an optimistic and evocative indie mix, blending sounds from both hemispheres.

We run a music series in the heart of Dartmoor, presenting eclectic music into the heart of our community. This has become an exciting meeting place for expansion and dialogue and a focus for the exchange of artistic ideas.

We have worked with many artists and created music to accompany exhibitions, documentaries, nature journals and multi media productions. In 2018-19, the artist André Wallace commissioned us to create the music for his exhibition, the Voyage, at Poole Museum. The music for this was released in 2020, on our album, Coracle of Life.

Our first album, Mariner’s Way, was released on the FMR label in 2009. Here we musically followed the mythical footsteps of the ancient mariner traversing across Dartmoor. It received stunning reviews both nationally and overseas. Our own musical voyage had begun.

Since then, some of our many memorable highlights have seen us spending time with an Aboriginal tribe in the beautiful and remote central mountainous regions of Taiwan; performing in the basement of the Downtown Music Gallery in New York, the jumping Avant Garden club in Houston , the sublime Zeitgeist art house cinema in New Orleans and giving a 2am recital to a cool and very wide awake hip crowd at the Two Days, Two Nights Contemporary Music Festival in Odessa!

Recently we have had the opportunity to perform meditative music in support of mental health and well being, in the glorious space of Wells Cathedral, Somerset, aptly described as the most poetic of English cathedrals. This performance series goes under the banner of Blue Concerts.

Our music reaches across musical boundaries and geographical borders. We are delighted that it is regularly broadcast on RTÉ Lyric FM, along with BBC Radio 3, ABC Australia, Radio New Zealand, WDR, ÖRF, RTHK, local Art Stations including Phonic FM, South Dublin FM & Devonstream as well as many internet stations in Europe, Japan and US.

Music on the Edge @musicontheedge
3h

RT @AndyDerrick6 : Back on lead trombone with the Manchester Concert Orchestra - looking forward to it!

Music on the Edge @musicontheedge
4h

Music on the Edge @musicontheedge
4h

RT @elonmusk : If you scare people enough, they will demand removal of freedom. This is the path to tyranny.