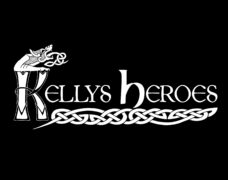 The richness provided by the accordion, powerful rhythm guitar and bodhran give a fullness of sound that belies the number of people on stage and with a repertoire encompassing fast and furious Celtic songs and tunes, gentle ballads and quality contemporary numbers by the likes of Christy Moore, Eric Bogle and Ewan MacColl as well as some original material, this East Midlands based band are one of the most sought after on the circuit.

The band was formed in 1983 with our vocalist, Tony, being one of the original line-up. Since then, Kellys Heroes have recently played tours of Malta and Thailand and have played to audiences including 40,000 people at the Glasgow Mayfest, 25,000 at the Heineken Big Top with The Pogues, a Chateau in France for a very exclusive birthday party and to 6 people in a kitchen for a family celebration as well as just about every other type of event you can imagine in between!

Some of the more memorable venues Kellys Heroes have played include The Royal Concert Hall, Nottingham, Alexandra Palace, London, Stowe School, Buckingham, Camden Irish Centre, London, Kilburn Irish Centre, London, Rock City, Nottingham, Celtic Supporters Club, Glasgow, Leicester Tigers Stadium, Leicester, The Hammersmith Apollo, London.
We have also played the end of tour parties for the Threepenny Opera and Reasons To Be Cheerful theatre productions and the end of shoot parties for a couple of ITV series as well as being filmed as part of the story lines!
Kellys Heroes have recorded 12 albums as well as individual band members appearing on many, many more.

Instrumentation includes vocals, guitar, button accordion, melodeon, bodhran, fiddle, banjo and Mandolin depending on the line-up booked. In addition, when playing for Ceilidhs and Barn Dances, Kellys always bring along a caller who works wonders at getting people involved in fun, easy traditional dances.