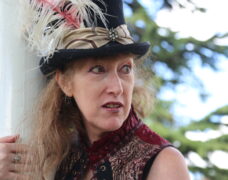 As you talk one word leads to another and if you are not careful you find a story has been made. There is something so essential and comforting about sitting down and being told a story. But don't relax, as suddenly you are looking at Dragons, meeting the Fae and bartering for your own freedom, all without moving from your seat!

Current Show for Adults: Women, Witches, and the Wild Hunt

Once Upon a time.

The wild hunt raced through the sky, taking its monstrous regiment of women, led by the goddess Diana, the Lady, to terrorise the world. The witches of the Sabbat rode into the night and the folk traditions bend and weave this story with those classical paintings of beautiful and tempting half-naked women riding and fighting.

And back in the real world is a woman, of varying degrees of beauty and youth, who gives you a love potion, a poultice for the boil on your bottom, cut your ingrowing toes nails and is also the local midwife. The chances that she flew on a broomstick with no knickers is fantastical, and the underwear part probably medieval wishful thinking. But the folklore says that on epiphany, the lady, with her wild hunt, would visit the chosen Hedge witch and woe betide that woman if she has not laid out a feast and entertainment for her surprised guests.

The hedge witch was part magician and part nurse and sometime storyteller. She lived on the edge of mediaeval society caught between convention and necessity, but she was all they had. Then when the bad times came, and the sickness, who did you turn to and also turn against. Rumour and stories and gossip and belief is not just a 21st century phenomena, there was always a cure, at a price, and one might just work.

Storytellers take you on amazing adventures, fight ferocious beasts, answer dangerous questions, and bring you home with just a story. Take part in the origins for the Ride of the Valkyrie’s the real Wild Hunt, the Women Goddesses of the night sky. We ride with the night hunt, eat, drink, and leave with payment in gold! The show runs for 1 hour with Q&A to finish. Suitable for a space 3m x 3m.

Storytelling is as old as the human race. It is the library, the store cupboard, of our oldest memories, knowledge, understanding and explanation. We all tell stories, but the storyteller takes us with them to another world where many things can and do happen. This tradition of the oral explanation, the telling of the tale, can be so simple but also so satisfying.
I am a professional storyteller who seeks out tales from around the world to tell at a variety of venues and situations.

RT @oliviasstories : When the Metropolitan Line was constructed in London, two houses were demolished and replaced by fake facades...#WyrdW …

RT @foxyfacedcharl1 : After a hectic few days of scrobbling im taking the caroplane in for a service. Then more planning with @PouncerSD  and…