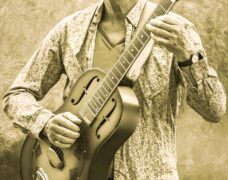 Paul Cowley.
If plotted on a map of the acoustic roots landscape, Paul Cowley’s unique brand of music would fall somewhere between Country Blues , Folk & Americana, probably with the departure point being Country Blues.
Paul – Musician, songwriter, performer & independent recording artist is originally Birmingham UK. He has lived in Snowdonia Rural Wales & owned a cottage there for over thirty years. A decade ago, disenchanted with city life, Paul & his wife packed & moved lock,stock & barrel to Morbihan Brittany France. They have converted a Breton Farmhouse and combine a rural Chambres d’Hotes business with Paul’s musical pursuits.
Paul’s musical journey started over two decades ago when an old Yamaha steel string guitar was gifted to him.This triggered an enduring passion for acoustic guitar, country blues & related music. The passion continues!
“Blues- soaked guitar & vocal work with a sophisticated urban lyricism informed by country blues but not dictated by a need to imitate it” - David Harley Folking.com
He tours all year round in France, Belgium & regularly in the UK. He has released three albums in France, the last title “Just What I Know” was included in Down At The Crossroads Top Ten Acoustic Blues Albums of 2018 and subsequently in 2020 The Top Twenty Acoustic Blues Albums of the past decade.
Paul understands the beating musical legacy of the blues. Rural is not an album lurking in the backwaters, it is a celebration of blues songs that have no need for effects and add-ons it is a perfect demonstration of stripped-back music in its simplest form” Liz Aiken , bluesdoodles.
2021 will see the release of Paul’s new album “LONG TIME COMIN” a celebration of a twenty year plus continuing musical adventure. The album features seven originals & five interpretations of well chosen songs by John Hurt, Blind Boy Fuller, Ray Charles, Willie McTell & Charlie Patton.
"If you like your blues acoustic and played with skill, feeling and obvious respect and love for the country blues, then, go get yourself a copy of Paul Cowley’s album. It is terrific."
- Down At The Crossroads.

“ I don’t go puttin’ no expert guitar playin’
I don’t even try to outplay nobody
I got my own way of playin’
I play by feelin” – Mississippi Fred Mcdowell - “Amen to that” – Paul Cowley
www.paulcowleymusic.com