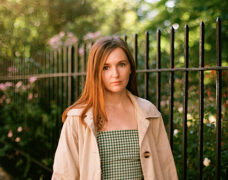 British folk singer-songwriter Maz O’Connor has been described by The Guardian as ‘one of folk’s brightest young talents’.

Originally from Cumbria, Maz she learned the songs of Bob Dylan and Joni Mitchell on her first guitar. After university, where she studied English and French literature, she moved to London, was awarded a BBC Performing Arts Fund Fellowship, and released her first album, ‘This Willowed Light’.

Maz has since released 2 albums and an EP and received play across BBC radio, from Radio 4 to 6music, with live sessions on Radio 2 and 3 along the way.

Praised for her lyrical songwriting and her ethereal vocals, Maz has also toured the U.K. and Europe, and played at festivals including Cambridge Folk Festival, WOMAD, Glastonbury and Kendal Calling.

Her new album, co-written and co-produced with composer Will Gardner, is an ambitious song-cycle set in the city at night. It explores themes of anxiety, isolation, inequality, capitalism, insomnia, regret, sexuality, spirituality, absent friends, and the search for redemption in an age of consumerism.

Maz is also composing a piece of music theatre based on the true story of Irish dressmaker Bridget Cleary, which is being supported by Arts Council England and Britten Pears Arts.

‘BBC Performing Arts Fellowship graduate Maz O’Connor is a real find, fusing influences from the past (Joni Mitchell) with those of the present (Bon Iver) to concoct a dazzling array of part electric, part acoustically-crafted folk that occasionally borders on the experimental.’ (Drowned in Sound)

‘O’Connor’s ace, apart from her remarkable songwriting talent, is her captivating voice. ****’ (Q)

‘The perfect mix of youthfulness and gravitas ****’ The Observer

A little bit of the beautiful traditional song ‘The Silver Dagger’ for you. I keep coming back to this one 💚🗡 https://t.co/rSjoFsRBSO

Called in to Fylde Guitars to see my pal Roger. He might be making something tasty for me… 🙊🙊🙊 https://t.co/RrHML7SOVd