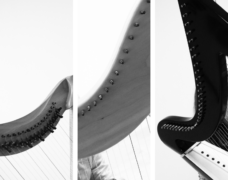 Based in Glasgow, 'The Willow Trio' are a clarsach trio playing their own compositions and arrangements of both classical and traditional music.
Having recently featured on BBC Scotland’s ‘The Campaign’ and on Celtic Connection’s Danny Kyle Stage, the trio have just released their debut Oystercatchers EP which is now available on Bandcamp and all popular streaming platforms. The trio have been featured on Talking Harps, Opening the Harp Chakra, Northern Soul, Local Heroes and BBC Scotland.
​Having received funding from GCAN (Glasgow Connected Arts Network) in 2020, the trio have also been working on an exciting new multimedia performance of Tchaikovsky's Swan Lake, based on Scottish folklore and traditions. Community work is important to the trio, and Swan Loch (funded by GCAN) is an interactive children's concert fusing classical music, Scottish traditions, puppetry, dance, and theatre.
Out-with the trio, each member follows a diverse career – multi-instrumentalist Sam MacAdam performs with The Sleekit Beasties and has released solo music, composer Romy Wymer has won second prize and the audience award in the World Harp Competition and is now writing her first album, and Sophie Rocks tours her award winning solo show 'From Shetland to Shanghai' across the UK.