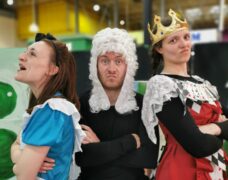 Same Difference Arts was created in 2015 to make outdoor theatre and performance which is both interactive and engaging for audiences. Our ethos is to combine street theatre skills with contemporary art practice to create work which links audience to their immediate environment. Since our beginning, Same Difference Arts has continued to invent unique and exciting projects which have toured all across the UK.

Since 2019 Same Difference have been taking their wildly successful outdoor shows into non traditional indoor spaces for rural touring. We are excited to expand this to the Rural Touring Network

The company is headed by Natasha Glew (BA, MA), who trained in physical theatre and has worked as a freelance performer in street theatre for the past five years. She is inspired by such artistes as Francis Alys, Heath Robinson, Invisible Flock and Wild Works.

In 2018, Same Difference Arts was awarded Arts Council Funding to create Memory Collectors. They were also supported by Bradford Festival 2018, to bring the show to the festival.

In 2019, Same Difference Arts were awarded their second round of Arts Council Funding to tour Memory Collectors in summer 2019. They have been supported by Greenbelt Festival, Arts by the Sea, Larmer Tree festival and Locomotion Railway museum.

2021 sees their new act Save The Planet being toured in response to the Climate Crisis.

In 2022-23 Same Difference are touring Alice in Wonderland to outdoor and indoor spaces, Sense-o-Matic to indoor spaces and our walkabout act Save the Planet to outdoor events.