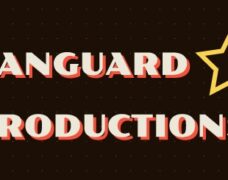 Vanguard’s shows are very easily adapted to all venues and can be set up with the minimum of fuss.
Vanguard specialises in nostalgic & reminiscence programmes and have taken them in to Theatres, Art centres as well as Community settings (care homes, museums, churches and village halls)
There are 7 different shows which include music and radio programmes of the 1940s, 50s and 60s as well as 5 different Christmas shows and 2 shows celebrating the Hollywood years.
All the shows use a radio “wireless” as a focal point to take the audience back in time and incorporate the programmes and songs of the particular decade.
The actors re-enact the characters of the radio programmes. Artefacts are used to enhance the production and the educational value of the performances.
The set is a backdrop of posters of the particular decade.
The many songs are used both as a tribute to the artists and to encourage the audience to join in and actively reminisce and participate.
To enhance the flavour of the period the audience are encouraged to come dressed in the costume of the period.
All the shows are fast-paced and, with audience participation, have appealed to a broad spectrum of the community.

The Company have also taken plays on tour and to the Edinburgh festival.
Our last play was a tribute to Neil Simon called “I Ought to be in Pictures” which toured in the south east and the Tristan Bates theatre in London.

Nelson.E.Ward has been an actor for over 30 years working in theatre (including the West End) Television and film. A full resume can be viewed on the Company's web site