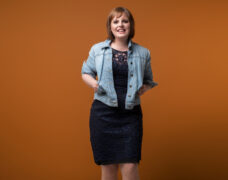 Soprano Nicola Mills attended The Royal Scottish Academy of Music and Drama, and then went on to sing in Opera Houses for 10 years around Europe. She has performed for Glyndebourne Festival Opera, Dutch National Opera, The Flemish Opera and Opera Monte Carlo, and loved every minute of it. In 2016 she started her own intiative called ‘Opera for the People’, bringing ‘opera’ and ‘crossover’ music to people and places, in unlikely settings. She also has a ‘Song Menu’ and lets the audience choose the songs. This has taken her around Europe, to Canada and New York, where she performed her own show called ‘A Soprano and a suitcase’. Throughout lockdown, every street became a theatre and she brought her crossover singing to every day people outside their homes, also being captured by BBC Look North. She received letters from The Queen and Prince Philip too. She also loves performing her one woman tribute to Julie Andrews called ‘A Spoonful of Julie’. Nicola is happiest when singing and connecting with people, and loves doing it in her own unique style. It really is friendly, down to earth and feel good. It's 'Opera for the People'.

Every street a theatre in lockdown