Spot On, Lancashire’s Touring Network, celebrate 20 years of rural touring this year – happy birthday from all of us here at the NRTF! Sue Robinson, Spot On Director, looks back on the past 20 years:

Spot On Lancashire will be 20 this autumn. I can’t take the credit for starting it up, but I have been running it for a very long time. That’s the thing about rural touring. The sector nationally is full of people who find out how wonderful it is, and then stay put. Artists, managers and volunteer promoters.

Rural touring in England has been around for nearly three decades, and across England there are 36 networks and 2,000 village venues who are part of what we could now call a ‘movement’. Yet sometimes we struggle to be seen. It’s the little roads, I think, you have to look hard for them. Rural touring is not as visible as a traditional arts venue. We only exist when a show ‘pops up’ in a community.

This was just at the beginning of email, facebook didn’t exist, you had a long wait whilst lines formed for your webpage, and a time before the lottery. You would wait three months to hear about your £1,000 application to the regional arts board. Arts for Everyone transformed Spot On in 1998 when we joined a successful NRTF national bid. This set us on our journey to being regularly funded by North West Arts Board in 2002, and now part of the national portfolio. That investment, partnered with local authority support, has transformed the UK rural arts landscape and raised ambitions and expectations.

Plenty of North West and UK artists have sustained a living, touring into rural areas across the country. We must be well over 1,500 Spot On events.

It’s not just about halls. We’ve placed work in churches, parks, campervans, storage cupboards, and even a metal whale on wheels. If we can fit an artist and an audience in it, it’s a venue.

The events wouldn’t happen without volunteers. They are the backbone of the network and about 40% of our service is delivered by people willing to give their time for free.

We became part of the new Northern Consortium, set up in 1999 following a successful bid to the Millennium Commission. In partnership with five other northern networks, we continue to support artists new to rural touring to develop work for the sector. This isn’t just about introducing artists to new audiences, it’s about nurturing talent, and assisting artists in sustaining a career in rural England.

Bringing international artists to the county is important. We’ve also connected the Centre of the UK with Middle Earth, hosting New Zealand musicians in Dunsop Bridge. It keeps us connected to the wider world, puts us on the map, and encourages tourism (they all go exploring when they are here). It gives people an idea that no hall is too small, or audience too remote.

How will we look in 20 years time? It’s impossible to say. Two years ahead is daunting. Digital technology moves so fast, we have satellite broadcasting, and new ideas and new companies will develop and emerge.Funding will change, and priorities will shift. Communities will change too. But if we are still around, it’s due to artists, communities and investors all sticking together like glue; because time has shown that rural touring is an all round good thing. 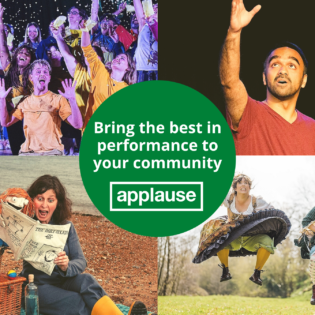