After a glitzy awards ceremony at the Hi-VIS: NRTF Conference 2019, held in Bangor, Wales 2 – 4 July 2019. National Rural Touring Forum is delighted to announce the winners of Rural Touring Awards 2019. Hosting the awards was Kate Fox, stand up poet, who was joined by the nominees and the majority of the rural touring sector, including schemes, programmers, directors and performers to celebrate the talent and passion of this vibrant creative sector.

The Awards enable the NRTF to raise the profile of the professionalism prevalent in rural touring. It is an opportunity to draw attention to the quality of performance and performing companies as well as to collaborations and the network of individuals who go above and beyond on behalf of the health and cohesion of their local community. The awards reward not just the winners but everyone who has performed, organised and taken part in rural arts & touring.

Breakthrough Performance of the Year ·

Touring Scheme Collaboration of the Year ·

Favourite Performance of the Year – best show you saw ·

Young Person of the Year ·

WINNERS
Young Person of the Year

BIO: I’m 20 and live in Chirnside in Berwickshire, in the Scottish Borders. I have lived in the Borders all my life. I like the Borders, but transport is a real problem, it is difficult to get anywhere quickly on public transport from Chirnside.I love music, both listening and playing and am also really interested in sound engineering. I also enjoy photography and have recently started taking photographs at Live events.
QUOTE FROM NOMINEE: “I’m surprised by the nomination but honoured to have been nominated and glad to be making a positive impact on rural touring”

JUDGES THOUGHTS: It feels to me that Jasmine has gone deeper into the idea of what Rural Touring is, and she seems like a really bright prospect for the future.

Break Through Performance of the Year

BIO: ‘Common Lore’ is a fast-paced, multi-skilled solo show by actor and theatre-maker Sophia Hatfield (aka Stute Theatre), which retells Angela Carter’s collection of Fairy Tales for a modern, young rural audience. A fast-paced fusion of rap, spoken-word, live electronic music, multi-rolling and physical theatre, this production attempted to push the boundaries of solo storytelling through the creative use of technology – with live projections and sound cues triggered entirely by the performer on a mobile phone as part of the action. Inspired by interviews with young people in libraries across the North West, this show took relevant, inspiring theatre to libraries, youth theatres, schools and rural venues engaging young people who do not traditionally access theatre.

QUOTE FROM NOMINEE: I am absolutely delighted that the creativity, ambition, passion and hard work of the wonderful team behind Common Lore has been recognised through this nomination. Whilst incredibly rewarding, creating and touring theatre for young adults can be challenging. From the very first commissioning meeting with Spot On, through rehearsals and when touring the show, I was blown away by the enthusiasm, dedication and hard work of the many rural touring organisations who made this show happen. The rural touring community took a risk on a new piece, with the hope of welcoming and inspiring the next generation of theatre audiences, whilst supporting Stute Theatre as an emerging company and I’m incredibly grateful. Thank you so much!

JUDGES THOUGHTS: This feels really ground-breaking because of its brief to appeal to young people in Library spaces. I like the idea of the show and the way it was written and performed.

QUOTE FROM PUBLIC NOMINATION: “Sophia uses these three stories to reflect on what it is like to be an un-wealthy 18-year-old in the north, yet it is done with wit, humour, and sophistication. Students, apprentices, grandparents and anyone else who was ever 18 will love this piece” Anon

BIO: Bara Caws was established over forty years ago to fulfil the demand for professional theatre for the Welsh community in the Welsh community and we are by now the oldest professional community theatre working through the medium of Welsh. We continue to provide a unique service to our grassroots audiences at the heart of our nation and are proud to be recognised as a mainstay of the Welsh theatrical landscape.

QUOTE FROM NOMINEE: We at Theatr Bara Caws are delighted to have been nominated and shortlisted for the National Rural Touring Awards 2019. It’s wonderful to know that our work continues to be appreciated throughout Wales, and we feel passionate that we must continue to strive with our mission of presenting a high quality diverse artistic programme at the very hearts of our communities. Recognition such as this nomination is greatly appreciated – thank you.

JUDGES THOUGHTS: I’m excited and moved by the fact that they make shows in Welsh, creating new work in a so-called minority language and challenging the rest of us about our ideas about what art is and what it can be.

QUOTE FROM PUBLIC NOMINATION: “Theatr Bara Caws is a community theatre company who present original, relevant work to the widest possible cross-section of people, offering theatrical experiences of the highest quality, bringing entertainment and excitement, ingenuity and relevance to the hearts of communities in Wales” Anon

Nominees – I Ain’t Afraid of No Ghost – Little Earthquake, Excalibow by Bowjangles& Brilliance by Farnham Maltings

WINNER – I Ain’t Afraid of No Ghost – Little Earthquake

BIO: Gareth Nicholls and Philip Holyman, aka Walsall-based theatre company Little Earthquake, have been together for 17 years, making work with each other for 14 years and have been married for (almost) one year. Little Earthquake observes one commandment: “Thou Shalt Not Bore” — and our next big not boring project is MoonFest, a nine-day celebration of the 50th anniversary of the Apollo 11 Moon landing which runs between 16th – 24th July 2019. (Our first wedding anniversary happens to coincide with the day on which Neil Armstrong and Buzz Aldrin became the first men to land on the surface of the Moon.)

QUOTE FROM NOMINEE: “We are very proud rural tourers — the network gives us a unique opportunity to connect with, learn from and, most of all, entertain audiences who live outside the catchment areas of major metropolitan arts venues, up and down the country.It is thanks to the very existence of the rural touring sector — and to the hard work of the thousands of people who support it, both paid and unpaid — that artists like us get to build these lasting relationships with audiences in the first place.

Our “Favourite Performance of the Year” nomination has come directly from audience members who have experienced and enjoyed our work — and being shortlisted for this award is a massive validation of our most fundamental ambition for Little Earthquake: to make audiences the most important ingredient in everything we do.”

JUDGES THOUGHTS: This show had clearly really made the audience think about the issues, as well as entertaining them.

QUOTE FROM PUBLIC NOMINATION: “I even shed a tear as there was a real element of truth to the story. I think out of all the shows I have seen this year it was the most emotionally impactful.” Anon

Nominees – The Northern Consortium, Carn to Cove and Villages in Action & The Inn Crowd
WINNER – The Inn Crowd

BIO: InnCrowd is a partnership project from Applause Rural Touring, Creative Arts East and the National Centre for Writing.  The project supports rural pubs throughout the South East and East of England to host exciting and inspiring spoken word, poetry and storytelling performances in their pubs reaching and engaging with non-traditional arts audiences. This collaborative project also engages national Charity Pub is the Hub as an advisory partner supporting the project with pub industry expertise and advice. A key aspect of the project is the support Inn Crowd gives some of the UK’s best spoken word artists to create, develop and tour their work to new areas. Started in 2016, the scope and range of the project has increased year on year with overwhelming responses from audiences and landlords alike w over 200 performances have taken place primarily in the southeast and further afield in collaboration with rural touring organisations nationally.

BIO: Gwyneth Kensler – Brought up in Holywell, I attended Bangor University in 1960. I married my husband in 1965 and then spent time living and working abroad. We settled in Denbigh in 1980.

After a career teaching French and Spanish, I stood as a town and county councilor in 1995 and remain a county councilor. I joined the Theatr Twm o’r Nant committee in 1983 and became a secretary in 1988. About 12 years ago I successfully applied for grants of £.75m to make the theatre as DDA friendly as possible; our theatre is now flourishing thanks to our dedicated team of volunteers.

Gaynor Morgan Rees – Born and bred in AbercwmIboi, South Wales, I have been working as a professional actress on stage, radio, and television for over half a century. I moved to Denbigh in 1982; I have been a town councilor since 2004 and was mayor in 2012.  I met Gwyneth in 1983 and we soon became involved with Theatr Twm o’r Nant.  Since the refurbishment of the theatre 10 years ago, I have been the booking officer. The theatre has to be self-supporting since it does not receive any subsidy; we are all volunteers and give up our time for free.

QUOTE FROM NOMINEEs: “We are delighted to have been nominated by Night Out Wales with whom we have a close and happy relationship. Without the sponsorship of the Night Out Scheme, we would not be able to hold professional performances at Theatr Twm o’r Nant. We have a full, varied and exciting programme.”

“What a surprise and also an honour. With funding for the arts so greatly reduced, we are pleased to be able to do what we can to help promote the arts in Wales.”

JUDGES THOUGHTS: They have obviously done an amazing job over 20 years – people like this make the world go around

QUOTE FROM PUBLIC NOMINATION: “For over twenty years formidable double act Gaynor Morgan Rees and Gwyneth Kensler from Theatr Twm o’r Nant in Denbigh have booked performances through the Night Out scheme in both English and Welsh.  In the last four years, they have promoted 36 shows (so far) and we anticipate many more to come.” 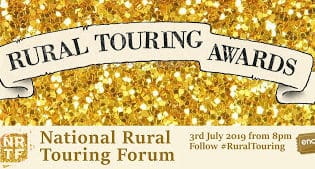